A Persona is the fictional character or you can say a model of a particular users which is in research for your product to design  for a better  understanding and the needs with this model summarisation directly helps in the product quality. `It also helps to communicate research about people who have been observed in some way. Persona is not a real persona it is actually as a specific person’s characteristic and it is synthesised from the observations of many different people.

In the Design Thinking process, designers will often start creating personas during the second phase, the Define phase. In the Define phase, Design Thinkers synthesise their research and findings from the very first phase, the Empathise phase. Using personas is just one method, among others, that can help designers move on to the third phase, the Ideation phase. The personas will be used as a guide for ideation sessions such as Brainstorm, Worst Possible Idea and SCAMPER

This persona cuts straight to the nitty-gritty. “It focusses on: What does my typical user want to do with my product?”. The objective of a goal-directed persona is to examine the process and workflow that your user would prefer to utilise in order to achieve their objectives in interacting with your product or service. There is an implicit assumption that you have already done enough to recognise that your product has value to the user, and that by examining their goals, you can bring their requirements to life. The goal-directed personas are based upon the perspectives of Alan Cooper, an American software designer and programmer who is widely recognized as the “Father of Visual Basic”. 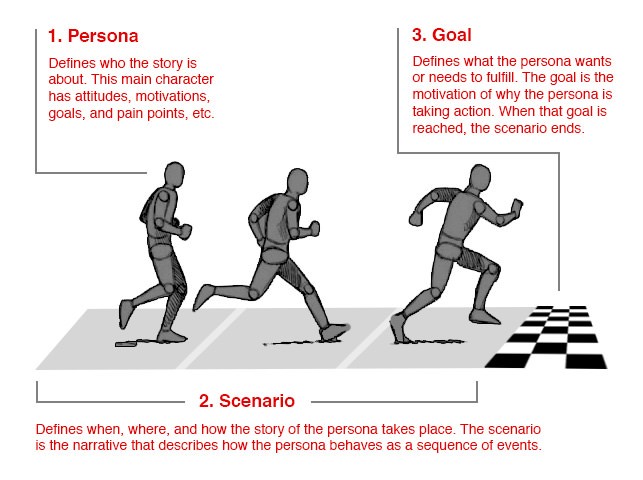 The engaging perspective is rooted in the ability of stories to produce involvement and insight. Through an understanding of characters and stories, it is possible to create a vivid and realistic description of fictitious people. The purpose of the engaging perspective is to move from designers seeing the user as a stereotype with whom they are unable to identify and whose life they cannot envision, to designers actively involving themselves in the lives of the personas. The other persona perspectives are criticised for causing a risk of stereotypical descriptions by not looking at the whole person, but instead focusing only on behaviour.”
– Lene Nielsen

The fictional persona does not emerge from user research (unlike the other personas) but it emerges from the experience of the UX design team. It requires the team to make assumptions based upon past interactions with the user base, and products to deliver a picture of what, perhaps, typical users look like. There’s no doubt that these personas can be deeply flawed (and there are endless debates on just how flawed). You may be able to use them as an initial sketch of user needs. They allow for early involvement with your users in the UX design process, but they should not, of course, be trusted as a guide for your development of products or services.

As per the respective design of particular personas, it is very important for improving the product quality.

FacebookTweetPinLinkedIn What is Backend Development? Backend Development is also known as server-side development. It is everything that the users don’t see and contains behind-the-scenes activities that occur when performing any action on a website. It focuses primarily on databases, backend logic, APIs, and Servers. The backend of a website is a combination of servers, applications, and databases. […]

FacebookTweetPinLinkedIn Predictive analytics and machine learning in healthcare are rapidly becoming some of the most-discussed, perhaps most-hyped topics in healthcare analytics. Machine learning is a well-studied discipline with a long history of success in many industries. Healthcare can learn valuable lessons from this previous success to jump start the utility of predictive analytics for improving patient care, chronic disease management, […]

FacebookTweetPinLinkedIn Work in an office for any measure of time and it turns out to be certain that not all employees work the equivalent. A few people have astounding focus capacities, working endlessly sets out down for hours, others like to wander and gossip, building connections (and diverting others from their work), some settle down […]