What is a Full-Stack Developer?

What Does a Full-Stack Developer Do?

Their working knowledge of both front and back end development grants full-stack developers a remarkable level of occupational flexibility. They can build web applications and websites without any help at all, as well as move freely throughout large scale projects offering help in all areas. 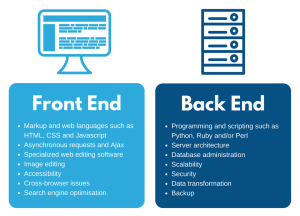 How to Become a Full-Stack Developer

Self Learning about Full-Stack Development

You could save yourself some money by teaching yourself. The internet is a veritable treasure chest of learning material just waiting to be absorbed by self-starters like yourself. Books, YouTube tutorials, podcasts, and at-home practice projects are a great way to inch you closer to that professional goal line and compliment more traditional learning methods nicely.

Full stack internships offer up-coming developers a chance to learn on the job and get paid for it. A lot of full-stack developer internships are made available to students actively pursuing a computer science degree.

Remote and in-person certification programs are a favorite across all proficiency levels. Whether you’re looking to start from scratch or brush up on a selection of skills, certificate programs offer flexibility and structure for those that crave both. Certificate programs are relatively contained too, with most boasting completion times of as little as a few months.

Enrolling in a full-stack development bootcamp is an effective way to sharpen existing skills or learn new ones. Their three to six month timelines make for an efficient learning experience too. Bootcamps cater to those looking to learn fast, and can cover a lot of ground in a short period of time. They’re also a lot less expensive than degree programs.

Self-guided courses are affordable too. Some even come with instructor support and access to a community of eager full stack students to engage with. Course quality can be inconsistent, so you’ll want to do a lot of research before enrolling. Having said that, individual full-stack development courses offer time conscious students a much more palatable serving size.

If you have the time and resources, a bachelor’s degree in web development, computer science, or programming might make sense. Formal education certainly looks great on a resume. And though it is possible to learn all of the required skills independently, there’s something to be said for a proven, college-style methodology.

The more programming languages that you know, the more useful you are to a potential employer. Web development is far from immune to the ever-changing nature of the tech industry.

Front end development describes what the end user sees, hears, and does. You’ll need a full grasp of the programming languages that ensure the functionality of an app’s visual aspects if you’re ever going to earn the title of full-stack developer.

A full-stack developer is expected to understand the following front-end languages and frameworks:

The user experience doesn’t mean much if the behind the scenes machinations aren’t in working order. A knowledge of the primary back end programming technologies and frameworks is critical to ensuring that the websites remain functional.

A full-stack developer is expected to understand the following back-end technologies and frameworks:

The Main Technology Stacks to Learn

The LAMP software stack is one of the most popular and most trusted stacks. All of the components listed below are available for free too, making it easy for a novice to learn and experiment with it at their leisure.

The MERN software stack is lauded for its customizability. The popular JavaScript-based stack is comprised of the following components:

The MEAN software stack’s popularity is surging as of late. It’s considered the ideal JavaScript software stack because it streamlines the development of websites and web applications quite well. This stack is built using the following:

Every web developer and engineer—front end, back end, full stack, haystack needs an online portfolio that showcases their work. Make sure to update it with your strongest projects before you start applying. If you’re new to learning front end development and/or back end development, you can add mock projects to your portfolio based on the work you’re doing in your courses.

A full-stack developer’s career is the most demanding and fulfilling one. It involves a combination of work at the front-end and back-end to build website applications.

Full-stack developers can work with multiple technologies, and so, they can handle more aspects of a project than an average programmer.

Full-stack developers are in high demand since they are a tremendous asset to any business. Their broad expertise enables them to be adaptable, flexible, and agile, which are crucial characteristics for working on software products in both the startup and non-startup worlds.

According to a report from LinkedIn, the demand for full-stack developers has been increasing at 35% each year since 2015. Another report from the US Bureau of Labor Statistics states that the number of jobs available for these professionals will increase from 135,000 to over 853,000 by 2024. So, in addition to the many job options available, this specific career option is also amongst the best-paid ones. That is why the future of MERN stack developers is quite secure.

A full-stack developer is an invaluable asset for companies seeking greater success in the technology sector. As companies are relying more and more on technology and the web, the demand for such experts is increasing.

Most of the candidates have doubts regarding the various procedure involved in JEE mains.

FacebookTweetPinLinkedIn As many of you’ll definitely know the basic definition of Digital Marketing, which is nothing but ” an online platform for promoting one’s business in different ways such as creating a website and promoting it via all the social media platforms”. The main components of Digital Marketing are: Content Marketing Search Engine Optimization Social […]

What are the common mistakes that interns should avoid?

Are you an intern?? Try to avoid these common mistakes.