Six Sigma is a management technique developed by Motorola in 1986, it is a set of tools and techniques for process improvement which focuses on quality improvement and waste reduction which results in a better and faster cost effective products and services.

Why six sigma is implemented

As this technique was discovered by Motorola in 1986, that time Motorola was a big company it had a big market share, suddenly in 1980s its market share was dropped from 90% to 10%. Motorola was developing Quasi Television sets which were quite famous but within time there were lots of defects which were cropping up, picture quality become poor and sound quality was defective, so a Japanese firm took over the quasi television set production and with in a month’s time, they produced the quasi television sets which had 120th errors which were produced by Motorola and surprisingly they were using the same raw material, same machinery and work force so one thing was quite clear that the problem was with the Motorola’s management, after this exposure they adopted six sigma technique.

The Basics of Six Sigma

Six Sigma represents a management ideology which focuses on statistical improvements to a business process. It advocates for qualitative measurements of success over qualitative markers. Therefore, practitioners of Six Sigma are those business people who use statistics, financial analysis and project management to achieve improved business functionality.

Six Sigma evolved to define numerous ideas within the business sphere and is sometimes confusing. First, it’s a statistical benchmark. Any business process which produces less than 3.4 defects per 1 million chances is considered efficient. A defect is anything produced outside of consumer satisfaction. Second, it is a training and certification program which teaches the core principles of Six Sigma.

The five steps of six sigma

True believers and practitioners in the Six Sigma method follow an approach called DMAIC which stands for Define, Measure, Analyze, Improve and Control. 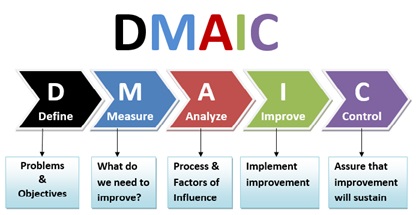 Six sigma is the highest possible range of achieving good quality of product which gives approximately 99.99966 % yield, as it gives only 3.4 defects per million which is the lowest you can get in the product management.Thats why people adopted this method from the previous 4 decades.

Word of the day

What BlockChain really is?

Basic knowledge about what is blockchian. It’s uses and the way it is used in different applications around the world.

Word of the day

What is machine learning?

FacebookTweetPinLinkedIn Introduction Today we are going to discuss what is machine learning and it’s application in near future that will be used in most of the technology. Machine learning works on the development of computer programs that can access data and use it to automatically learn and improve from experience. It is the scientific study […]

The Language of Business Word of the day

Here we have discussed a industrial term which is used in new technological era.