Civil Engineering has been an aspect of life since the beginnings of human existence. The earliest practices of Civil engg may have commenced between 4000 and 2000 BC in Ancient Egypt and Mesopotamia (Ancient Iraq) when humans started to abandon a nomadic existence, thus causing a need for the construction of shelter. During this time, transportation became increasingly important leading to the development of the wheel and sailing.

Until modern times there was no clear distinction between civil engg and architecture, and the term engineer and architect were mainly geographical variations referring to the same person, often used interchangeably. The construction of Pyramids in Egypt (circa 2700-2500 BC) might be considered the first instances of large structure constructions. 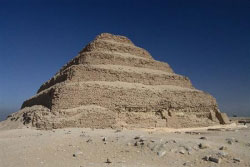 Around 2550 BC, Imhotep, the first documented engineer, built a famous stepped pyramid for King Djoser located at Saqqara Necropolis. With simple tools and mathematics he created a monument that stands to this day. His greatest contribution to engineering was his discovery of the art of building with shaped stones. Those who followed him carried engineering to remarkable heights using skill and imagination.

Ancient historic civil engineering constructions include the Qanat water management system (the oldest older than 3000 years and longer than 71 km,) the Parthenon by Iktinos in Ancient Greece (447-438 BC), the Appian Way by Roman engineers (c. 312 BC), the Great Wall of China by General Meng T’ien under orders from Ch’in Emperor Shih Huang Ti (c. 220 BC) and the stupas constructed in ancient Sri Lanka like the Jetavanaramaya and the extensive irrigation works in Anuradhapura. The Romans developed civil structures throughout their empire, including especially aqueducts, insulae, harbours, bridges, dams and roads.

FacebookTweetPinLinkedIn First of all, to use a technical term: “no duh.” For almost any new technology, there’s typically a big differential between what the tech journalists and analysts are implying everybody’s doing with that technology and what…everybody’s doing with that technology. Second, while the context is that Gartner’s survey found “Just26 percent are already deploying, piloting, […]

How to do Email marketing: Guide for beginners

FacebookTweetPinLinkedIn   With the presence of video ads, chatbots, artificial intelligence, neural networks, and blockchain. Do you think this is the death of email marketing? If you think this then you are wrong. You are missing out on a lot. Email marketing has been around for a while now, and it’s a simple and possibly […]

FacebookTweetPinLinkedIn What is a Project ? Project is a temporary initiative carried out by a team to meet certain goals.  Requirements for a Project Financial resources: Involves budget, business planning  Organizational resources: the experts in field working on a project Time: Setting start and due dates of a project Why is a Project required ? […]